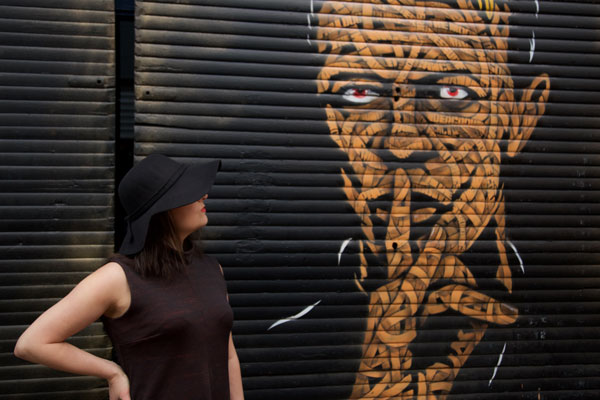 That news announcement on Monday 11th January 2016 marked the beginning of another very sad week and another goodbye I totally wasn’t prepared for. My first true love, my ‘confidant’, my constant, my hero… my David Bowie.

I’ve always felt alone with my passion for this man but these last few days have seen everyone on my feed, saddened and some devastated as me. Just one of my friends dared to mock the fan hysteria with sarcasm but I’ve resisted the urge to argue and instead, silently felt sorry for him- (who-shall-not-be-named) in that he clearly didn’t experience the love as much as we all did. 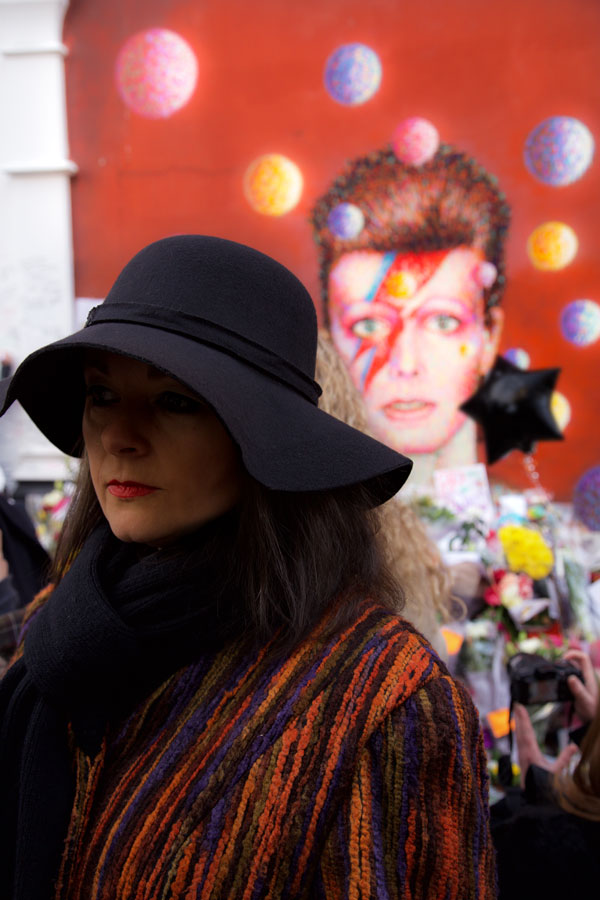 Since 13 years old, when I was accused of being a ‘weirdo’, not fitting into any of the usual cliques, I’ve hung onto his every word – after all, precious few wrote a song called Janine (He wasn’t very good at spelling ;-)) – I loved the fashions, going to most of his gigs: on shoulders of strangers, right at the front on the Serious Moonlight Tour 1983; watching him descend from the underbelly of a Glass Spider in 1987; and we even touched, albeit fingertips, at the Hanover Grand, 1997 when I won a pair of tickets from Capital Radio! I even went to the loo in his dressing room at the Royal Festival Hall 2002. Long story! There were others. And his inspiration is untold. But we never actually met. Something I was holding out for. But actually I’m not sure I could have kept my cool so it’s probably for the best that we didn’t. 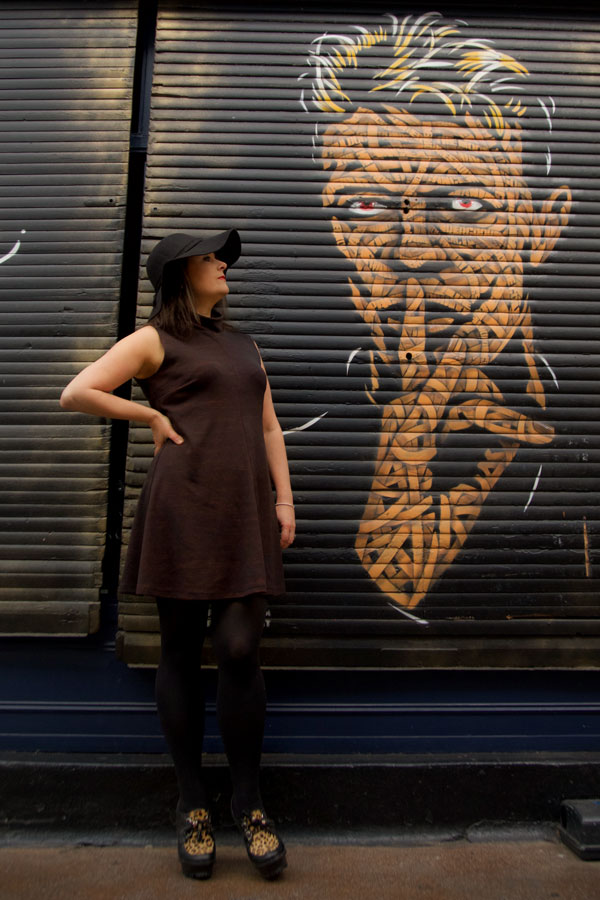 So when Mr O suggested Brixton, his birthplace, as a venue for my latest dress shoot it wasn’t questioned. Seemed wrong to pose in front of the memorial so we wandered off to the Village Market. Colder than a polar bear’s toes, it was. So we warmed up on some buckwheat galettes at Senzala Creperie. They were amazing – staff and food! 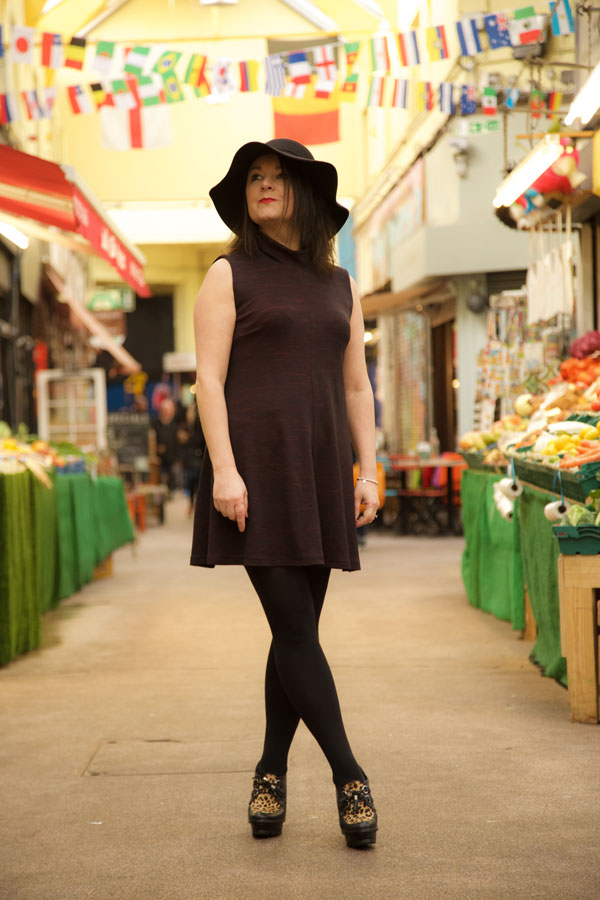 The dress is a vintage Simplicity pattern, no. 7527 from 1968. Another happy Ebay win about a year ago, if I remember rightly. It has been designed for wovens but I figured it would work just as well in a stretch jersey. 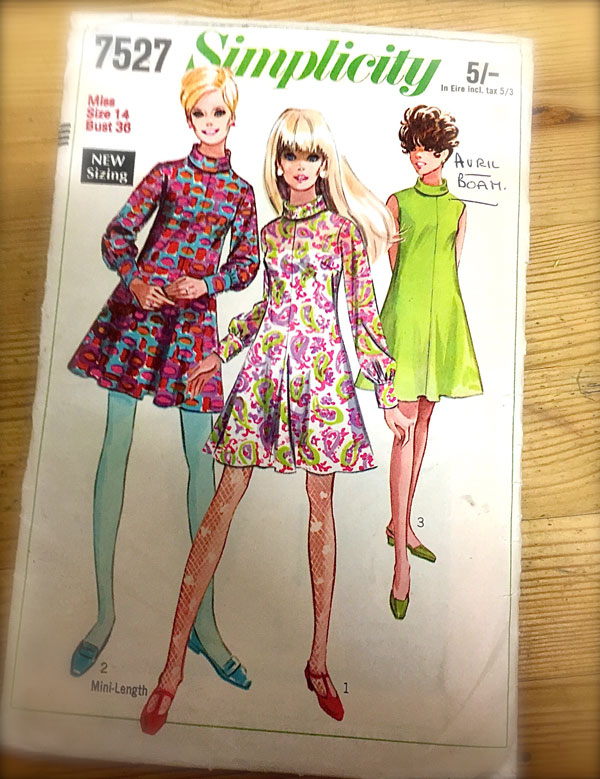 Incidentally, this stretch jersey is black with red flecks and allegedly ex-Hobbs. I got it from Dalston Mill Fabrics in the Ridley Road Market, not really knowing then what it was going to be. But it was always going to be something! 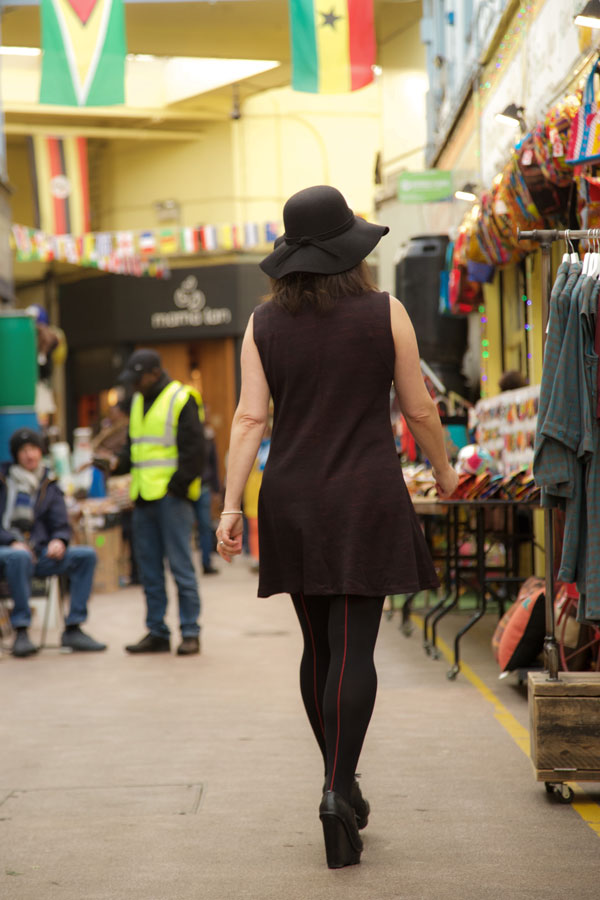 I’m not sure of the content. But it is very, very stretchy and quite weighty. A burn test revealed a minute quantity of something natural, so I’m guessing a viscose blend as it does have a lovely smooth feel about it. 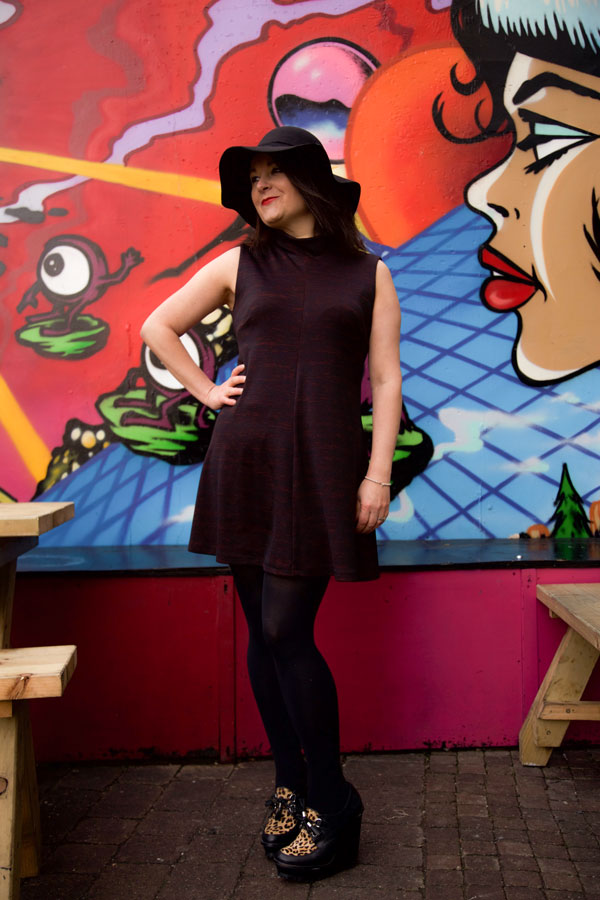 I expected it to come up big, not only because the pattern size was bigger than my usual but because stretch fabric, well… it stretches! There was rather a lot to come off. Five inches to be precise, so I took it, rather dodgily from the sides and a little bit from the centre front and back seams. This is usually totally inadvisable but I was in a hurry and hey, it kinda worked! Wrists dutifully slapped, I’ve since noted how to grade it down properly  and will make another with proper adjustments next time. 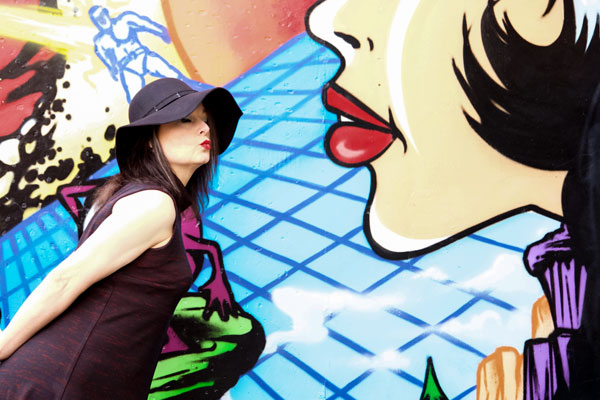 The best thing about making it in a stretch jersey is that it doesn’t need a closure. I made sure that the turtleneck did fit over my head before I sewed it for real. I tacked the whole thing with a long straight stitch before sewing with a shallow zigzag stitch on my ordinary machine, much the same as I did on my Agnes top. And then I finished the seams on my 3-thread overlocker. 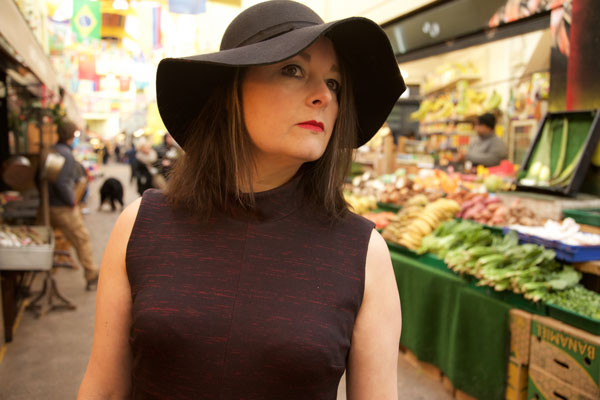 I’m not kidding when I say this was a quick project. I cut it out on the Wednesday evening, sewed it on the Thursday evening after work, and wore it on the Friday to a funeral. Needs must when you find that you don’t own (or fit into) a single black dress! Doesn’t look really funeral appropriate in these photos but suffice to say, my goosebump-riddled arms were covered with a respectable jacket on the day.

9 Replies to “Vintage Simplicity 7527 and a fond farewell”