I have just recently returned from the most exciting and inspiring 4 days away at the most amazing festival, ever – The Port Eliot Festival in Cornwall, UK.

Lucky old me was asked to join the Pencil Team to fuel the 80s theme and bash out some rara skirts for lots of festival goers who would then participate in the fashion show finale at the end of the week. It all seemed a little bit daunting at first, not least of all because raras aren’t the quickest things to whip up and with minimal resources and in a tent! 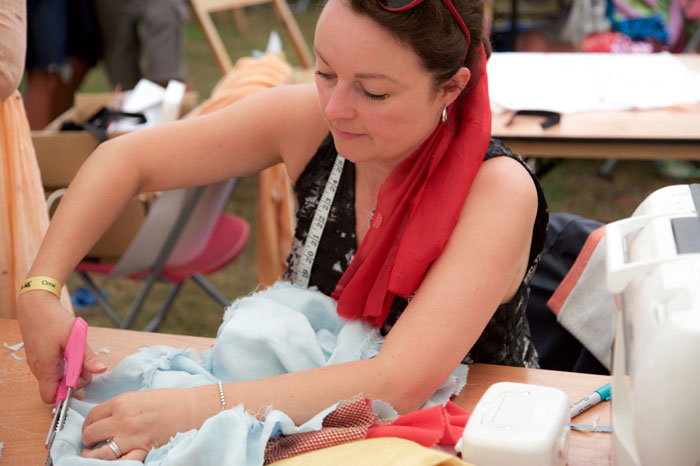 But we did have leccy and we did have good fabric. Boy did we have a substantial stash! Sponsored by Chloe no less. No expense spared for our budding fashionistas! 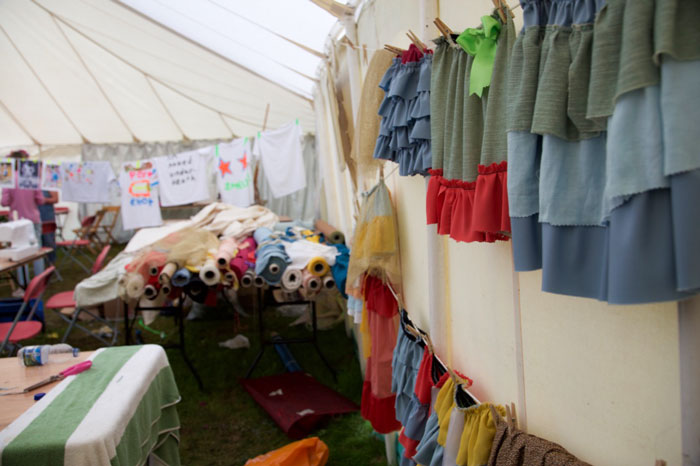 So the afternoon before the first session we arrived at a prototype. For Paul! A willing and most encouraging volunteer who was delighted to be my model and first happy customer! 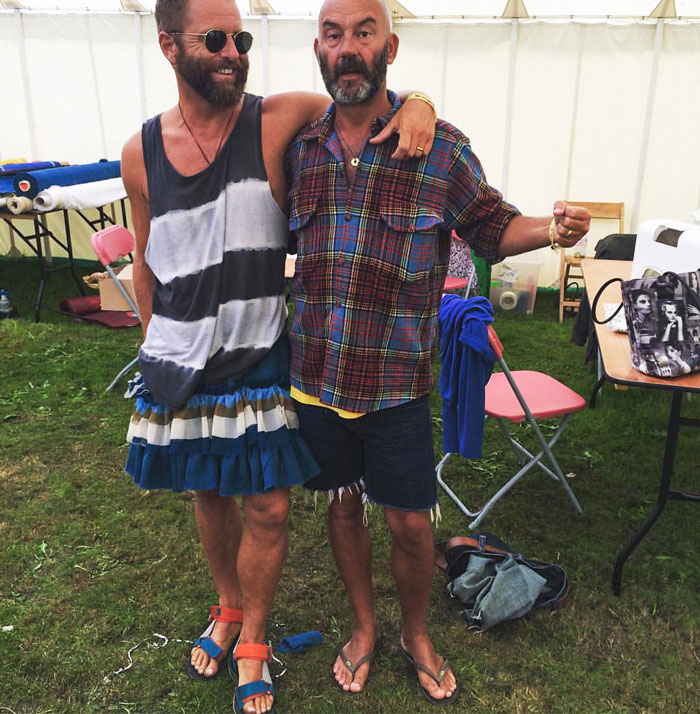 The order of the day was raw and ready! Overlockers didn’t get a look in and hey, who needs a hem anyway?! We had 2 shifts a day–one for each rara–at the very least, times 7 sewists: 4 fashion students from the Glasgow Clyde college; 1 amazing consultant stylist; one very wonderful experienced seamstress/mother/grandma to everyone… and me! 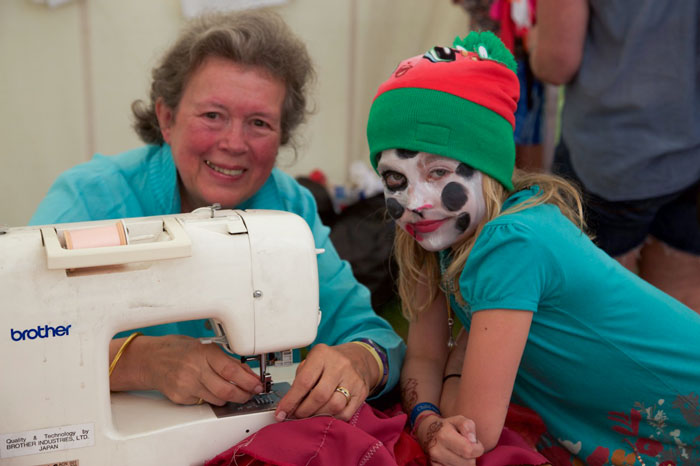 To emphasise the ‘raw’, we barely used scissors, save to snip the ends of the fabric before ripping near-as-dammit lengths for main skirt and flounce sections. I accounted for double waist measurement for the width and measured just above the knee for length. The measurements for the layers were guessed… and hoped! 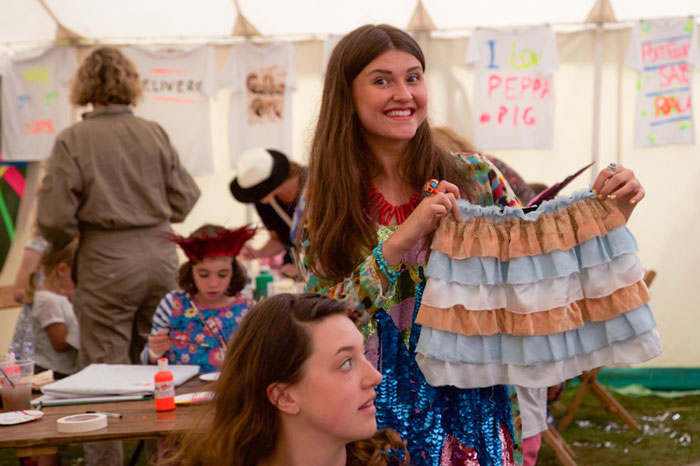 So we started flat, gathering the flounces from bottom to top. But not a gathering thread in sight. Way too much faffing! We just pinched and manipulated those strips under foot and zigzagged into position, covering each layer of stitching with the next flounce above. 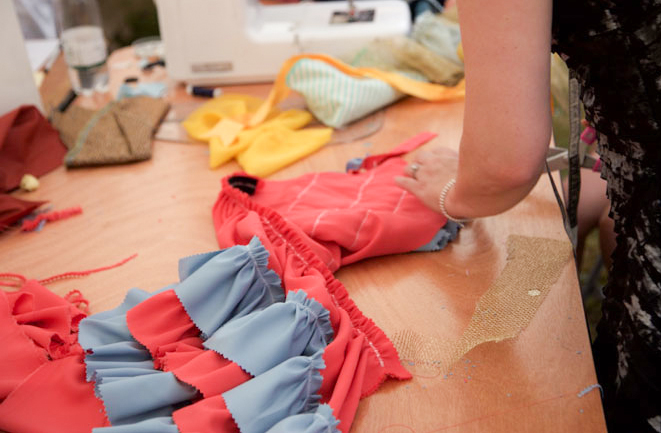 When sufficient layering was complete, we stretched and sewed the waist elastic (measured comfortably stretched against the body) to the top edge of the skirt using a wide zigzag stitch – making a casing was taking too much time. If there was any excess fabric beyond the end of the elastic, it was simply trimmed off. Then there was just one back seam to stitch up.

Each skirt took about an hour and a half on the whole, including a lot of chatting and demonstrating and getting the children to have a go. Some were willing. Some were quite happy to sit and chat and have a bespoke skirt made before their very eyes. I know I would be! 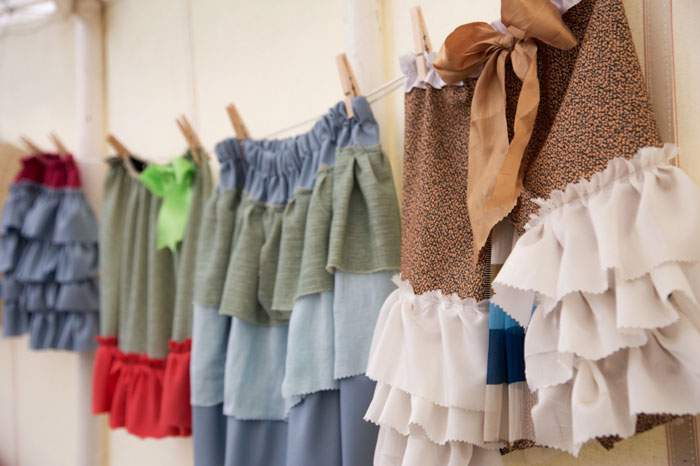 Little Miss O was in charge of printing the designer labels! 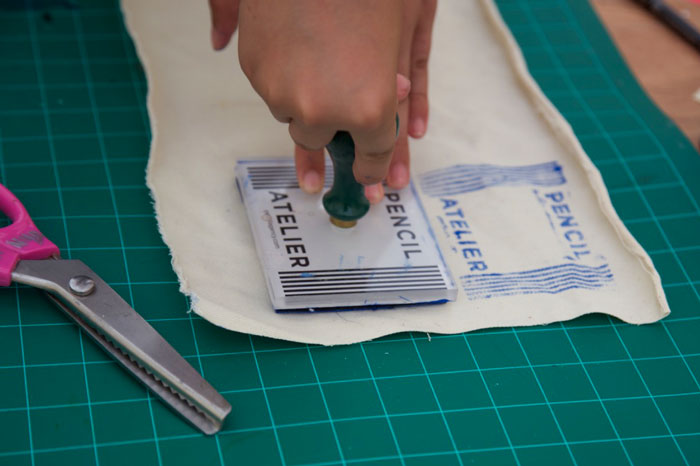 Every customer had their own ideas. How many flounces, what fabric combo and whether or not there were additional ribbons and bows. In fact it seemed the younger the customer the more determined they were to inject their own creativity. However much we tried to push the gold mesh it often got declined! They wanted pinks and blues and yellows. And oh the relief when only one frill was requested! 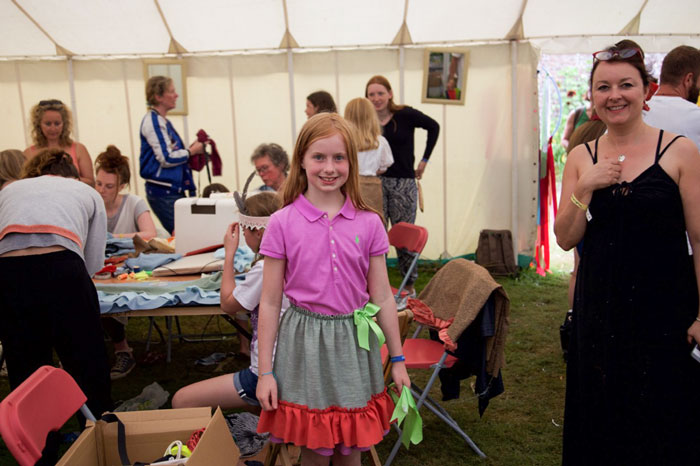 I can, hand on heart, say that the most amazing music to my ears was hearing that most of the pre-teen children I sat with knew how, or regularly operated a sewing machine. Mostly of their own! How refreshing is that. No surprise that it wasn’t from the teaching of schools or after-school clubs, but by the willingness of their fabulous grandmas. It really was so encouraging to hear. Sewing isn’t disappearing anytime soon, fellow sewingistas! There are grannies out there championing this all-important and special skill that so needs to be nurtured and that makes me sooooo happy.

These twin sisters were a prime example. They love making their own dolls clothes and hope to make their own clothes one day. Fashion student, Megan made the skirt on the left and I made the one on the right, independently, guided by each allocated twin. 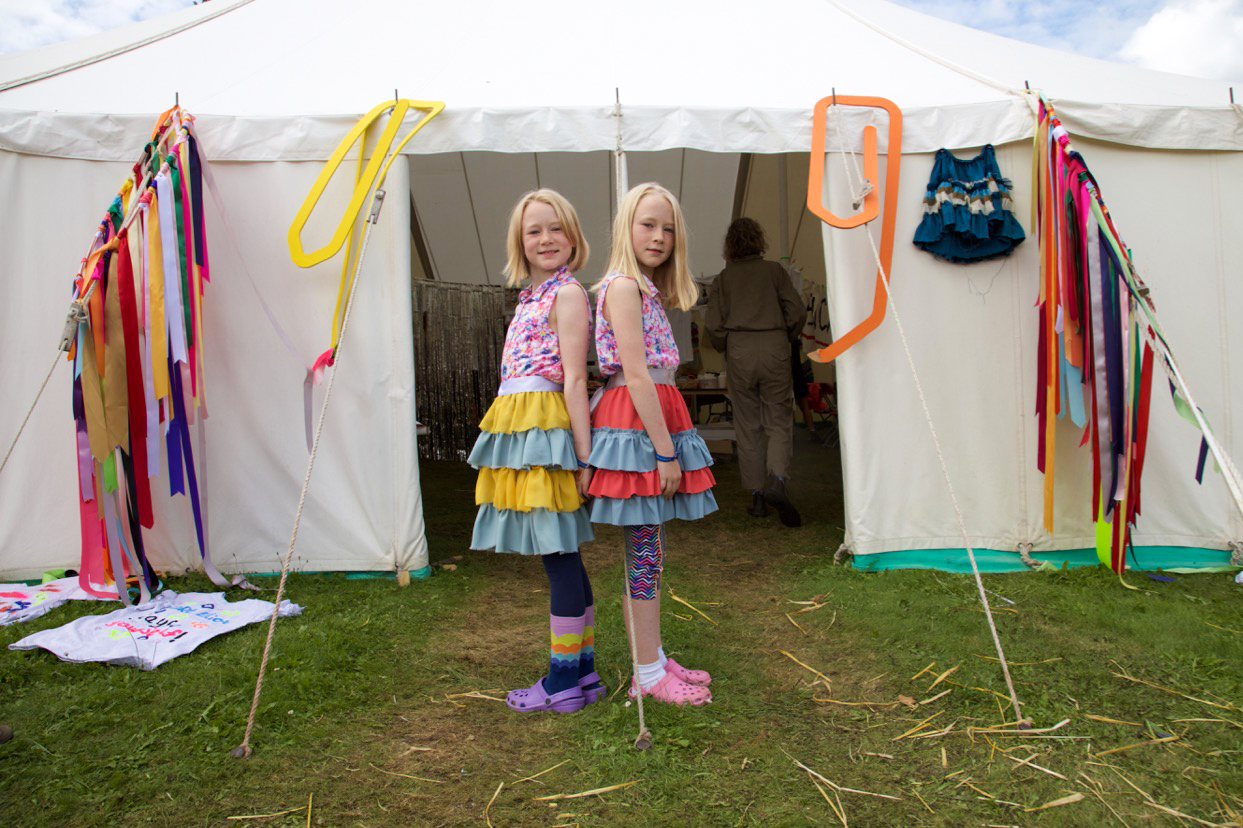 And the results were fascinatingly, coordinated! 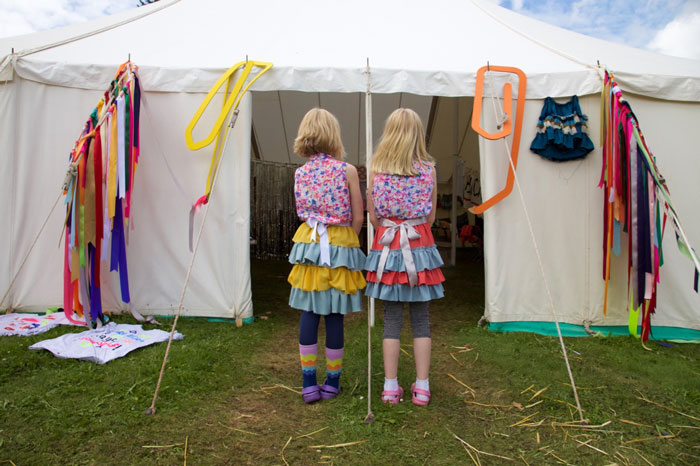 The sewing sessions were fast and furious but no less creative and fun. So much so that immediately after each one we stayed behind when everyone had left to make use of the fabric and whip up our own outfits. 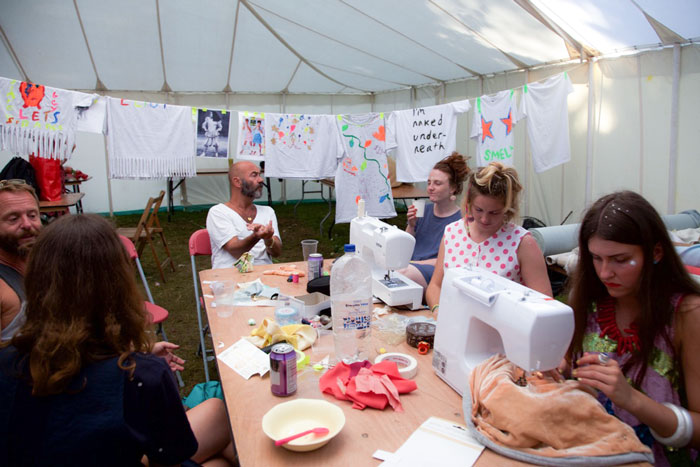 It was such a delight to meet these Scottish student beauties. So much energy and passion for sewing and fashion. And so much fun to have around. 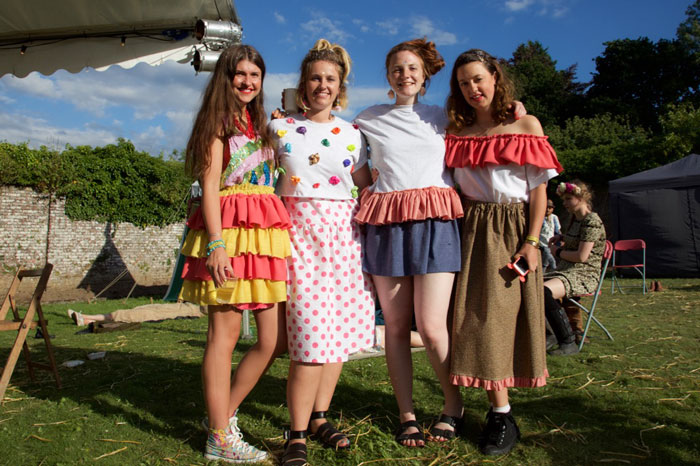 Whilst rara skirts flew off the sewing machines at one end of the tent, hand-painted slogan T-shirts were being pegged up at a rate of knots! A massive resurgence of 80s brilliance.

And then, when the last session finished, and the chilled dandelion and burdock tins where handed out (ok, so maybe there was an odd swig of the strong stuff!) then it was time for the fashion show. Paints were cleared, and in their place, a spray of silk flowers were jiggled into a jug, and the models were prepped by Jenny, Ruler of Pencil!

Just check out these amazing head-dresses made at one of Piers Atkinsons workshops! The single only downer for working at the festival was that I didn’t get to make one due to clashing of classes! 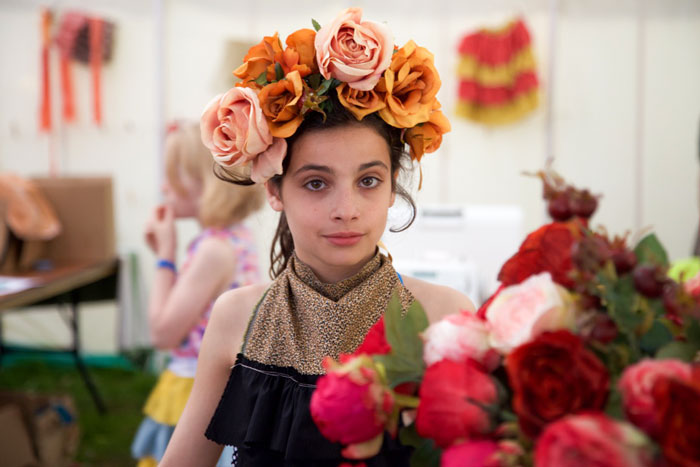 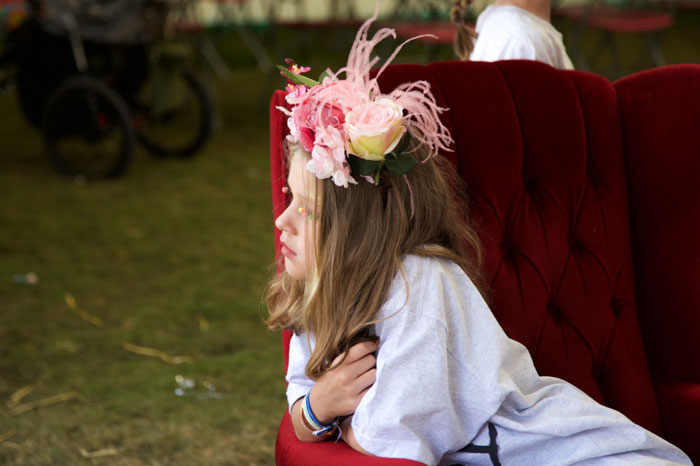 They were all so excited. rehearsing their moves: A flick of the hair, crossed arms, over the shoulder attitude, pouts galore, working those raras and T’s!

Hay bales outlined the catwalk and the music began. It was simply brilliant! 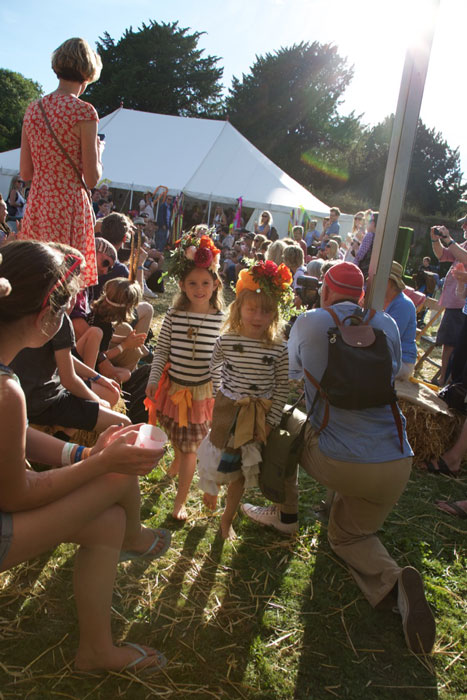 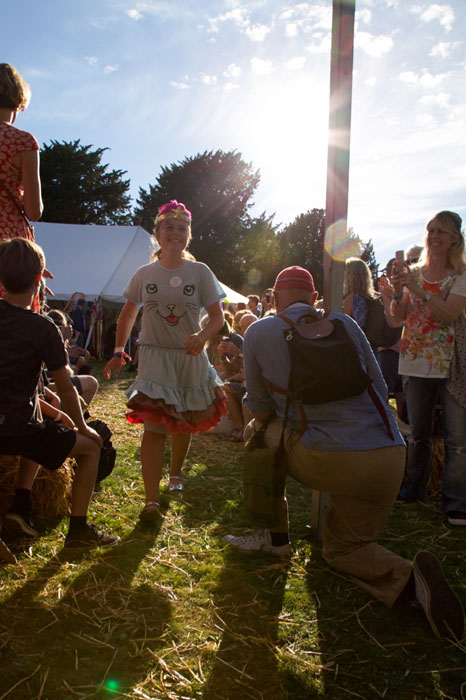 I felt a wave of emotion once the children danced off. And moreso when one came back to hug me and thank me and tell me it was her most favourite skirt in the whole world. I properly cried!

But moods surged the next day whilst taking photos at the Rubbish Olympics. Another amazing concept drummed up by Jenny! Human dressage, Egg and spoon race without said egg and spoon, pencil tossing, Zoolander musical statues and more. Quite difficult to photograph when you are splitting your sides laughing but here is one of my faves. They were ‘Best in Show’ of course!

Such a glorious place, such amazing creative people, such talents and inspiration. Port Eliot is such a magical place. I truly hope it returns next year. And I think you should all come too.

8 Replies to “The Pencil Atelier at the Port Eliot Festival”