It’s been a while since I made knickers – I made some Burda pin up pants here and here. But this week I had a go at some other varieties from this book: The Secrets of Sewing Lingerie by Katherine Sheers and Laura Standford. 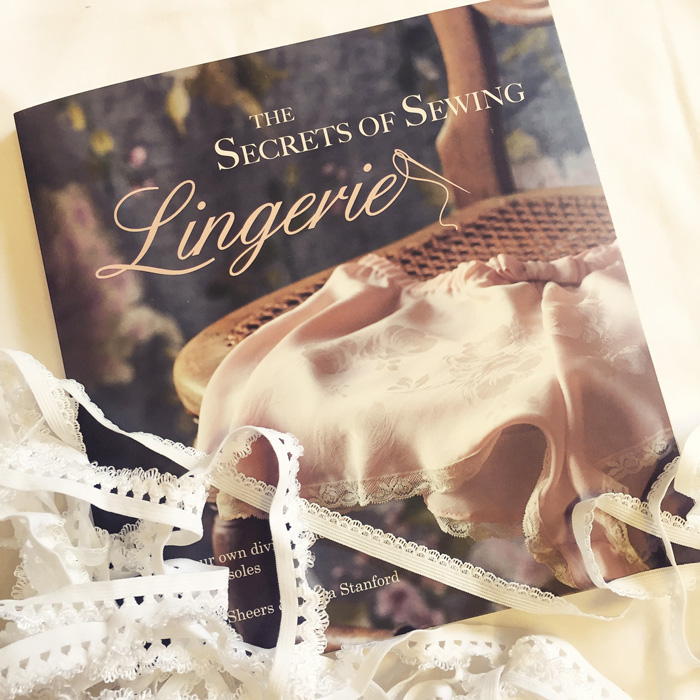 One of my lovely work colleagues was given this book, but as a knitter rather than a sewer, she thought it would be better placed in my hands and who was I to argue?! It pays to let the whole world know that you are a crazy sewing blogging lady: beautiful sewing things seem to gravitate towards you from all angles! And what a beautiful book this truly is. The photography is gorgeously inspirational and leaves you wanting to make everything in it.

So I started from the beginning, intending to work to the end. And I still might. I just need to overcome a few hurdles.

The first pattern is for a pair of cotton minis, entitled Pretty as a Picnic and they truly are. The fabric suggestion is cotton lawn and I could just imagine how lovely they would be to wear. It’s not my usual style. I’m more partial to a pair of stretchy big pants but ‘pretty’ won me over. I also have a fair bit of printed cotton in my stash and it struck me as a good project to use it up. 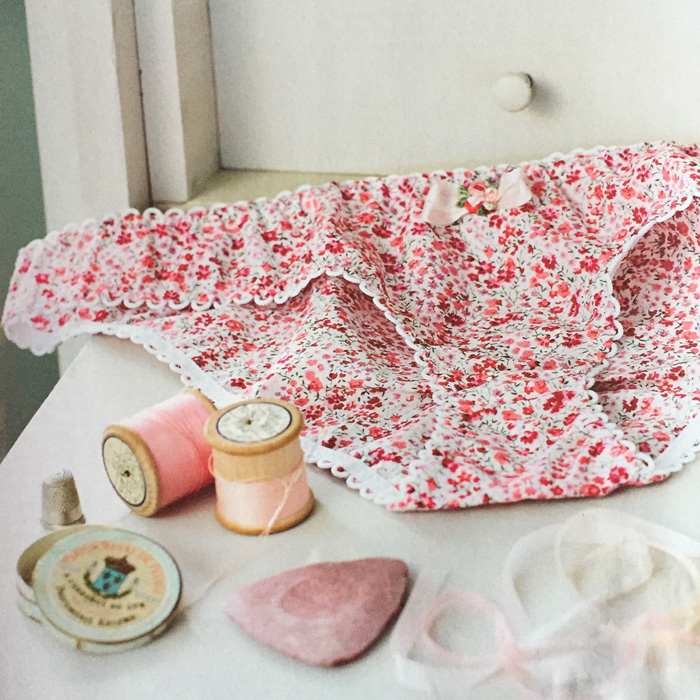 I painstakingly followed every instruction which incidentally was very clear and I even basted where suggested, like a good girl – I’m not usually that fastidious! But I had to abandon mission before completion when it became apparent how small they were! Far too mini for me. I think the photo in the book is a shot at an angle which makes them look wider at the sides than they actually are.

So I adjusted the pattern: I added an inch to the depth and a bit extra across the width too. (Gawd knows why I just didn’t trace a size up!) And so I made another pair. Seemed to do the trick but lets just say I’ve worn better. The recovery of the elastic is a bit slack (my bad, probs) and where the fabric is cut on grain there is just no give, so they do feel and look a bit strange. I may give them a third go, cut on the bias and see what happens. I WILL have a pair of pretty minis!

But rather than have a go straight away. I got lured by the cotton French knickers. After all. What could go wrong with those? And even if anything did, I could wear them to bed where no one would see. They are described as natural bed-fellows in any case. 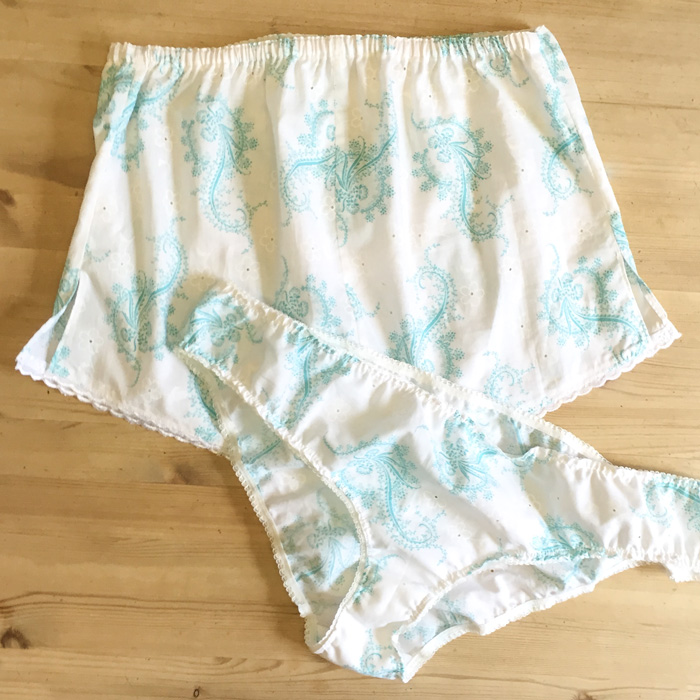 But why don’t I learn? These are cut on grain too. And I didn’t even pay heed to the need to size up either. I’m seriously such a bozo sometimes!

They look dreadful on me. They are simply too small but yet the waistband extends at least an inch above my natural waistline despite being sold as a ‘softly-fitted style sitting between the natural waist and the hips’. I checked that I’d traced the pattern correctly and I had, so I think that may be an issue with the pattern itself.

That said, I loved the implementation of some of the techniques used. There are French seams throughout. No rtw-style serged seams going on here and the centre front and centre back are pressed in opposite directions so there’s no bulk at the crotch. 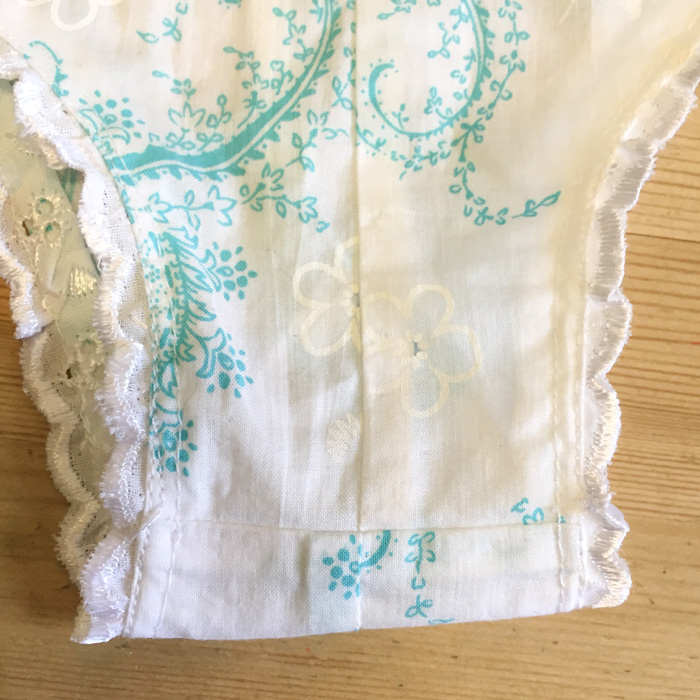 The top edge of the waistband is top-stitched at the fold and at the base of the elastic casing with gives such a neat and professional finish. Exact measurements are given for the casing and the size of the elastic which seems to prevent the elastic from twisting too. Little things certainly please my little mind! 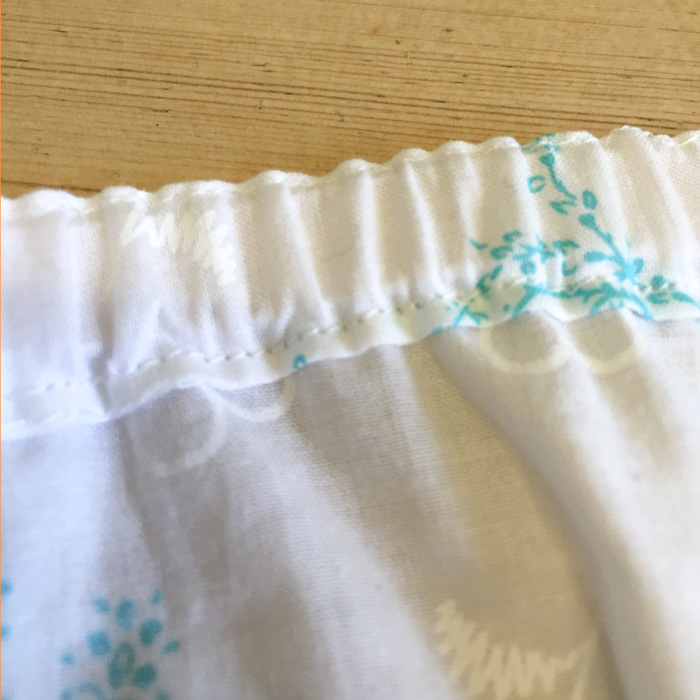 The coquettish vent is a lovely touch too. There seemed to be a notch missing off the pattern so I just allowed 3 inches which worked just fine. 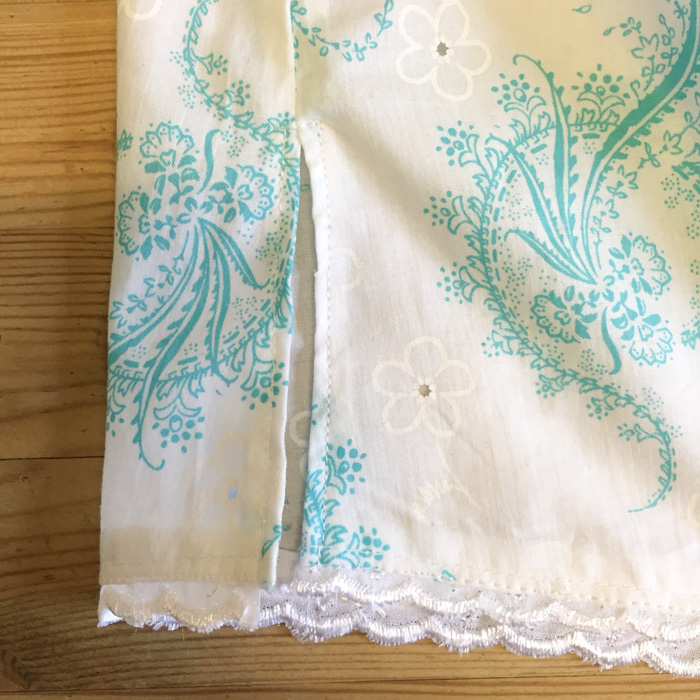 But if only they fit!! I’m convinced that these also would be made far better by being cut on the bias and then I realised that there was a version of bias cut silk satin French knickers further on in the book, doh! They use different pattern pieces with shaping at the centre front and back and appear to be much wider in size. I’m confused by this. Why would the bias cut ones need to be bigger? Surely the on-grain version would need to be bigger to account for lack of stretch. Am I missing something?

Anyhoos. I’ll report back once I’ve had a mo to try them out. Because I really really want these to work.

I’ve had a scout round to see if anyone else has had experience in sewing undies from this book but mostly the reviews are of the book itself and not any real findings. So please let me know if you’ve made any and what the outcome was. I’m really keen to know how these patterns have worked for for you.

Oh, and don’t forget to enter the Classic Tailoring Techniques for Menswear book Giveaway if you haven’t done already. Good luck all!