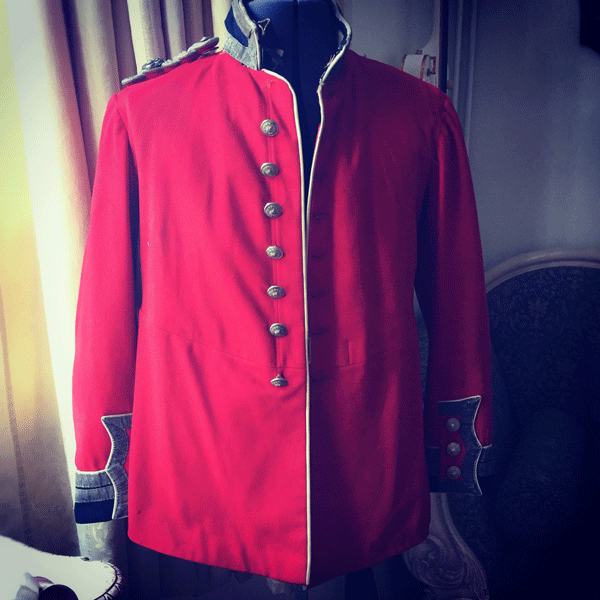 This jacket has seen better days. Though it can be forgiven for it’s ripe old age of 110 years or so. It’s an authentic British, Boer War military jacket. And it’s in need of a bit of love. The owner assures me it sees him through many a British summer festival period and so a bodge job on the lining will do.

But I can’t do a bodge job, can I? Not like what he means. It’s not in me. It might be a bodge job as defined by the thousands of tailors and historians that are currently whispering plans to send me to sewing hell (if such a place exists). But I’m going to do my best.

I state ‘plans’ in the loosest sense of the word. I actually haven’t got much of a clue. But I’ve decided to fly in the face of criticism and go with gut.

Externally it’s grubby. Very grubby, but, that’s mostly it. That red wool is sturdy stuff! It’s incredibly dense and felted, I’m sure. And there is not a single tear or hole in it anywhere. The collar however, is mostly dilapidated and detached and there is an epaulet missing. I’ve got fingers crossed that it’s missing at the back of Kev’s wardrobe somewhere.

It’s the inside that’s a mess. The silk lining and parts of the padding is ripped to shreds and that is the main issue.

Incidentally, here’s an interesting fact for you. Did you know, that the reason these jackets were lined with silk, wasn’t to be all posh-like. It was so that if and when a soldier were to be stabbed with a sword or dagger, the silk lining would wrap itself around the blade as a barrier against infection. Clever eh?

Still makes me cringe a bit with some of the staines on this jacket. I’m hoping Kev made them more recently through cider or festival food spillage and that’s where the authenticity stops!

So, now I’ve put it out there, I’m duty bound to bloody well get on with it. I’ve been sweating about this for far too long. And it’s time for action.

This will be done in little shifts with lots of thinking and head-scratching in between and I’ll try and fill you in as I go along.

Ever bitten off more than you could chew?!

10 Replies to “Plans for this Boer War jacket”