I’m definitely on a Burdastyle roll this year. And largely thanks to Saturday Night Stitch who prompted said roll with her #burdachallenge2018 over on Instagram. I didn’t commit to a set number of projects because, knowing me, I’d end up self-sabotaging my own plans (because that’s my favourite hobby apparently) and not make any at all! So in not making a declared commitment I’ve made two glittery bell-sleeve dresses, one black, one red (quelle surprise), a red raglan sleeve top which I’ve yet to blog and these awesome satin joggers that I made for my daughter: 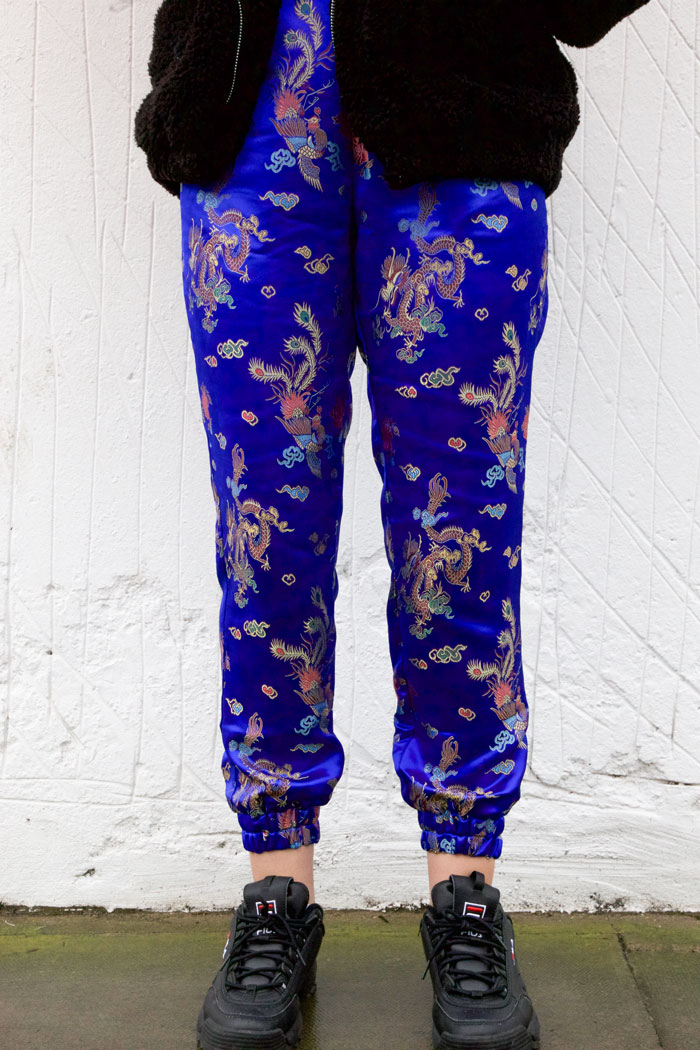 I feel I can say ‘awesome‘, not to big myself up but because the fabric choice and the style was all down to Little Miss O. It’s very rare that she will accept a hand-made offering these days, preferring a high street label or a funky second-hand designer deal from Depop. So when she came to me with this request I couldn’t wait to get started.

I’m so thankful for my collection of Burda mags. There’s always a something I can use or adapt but in this case, the exact pattern I needed was nestled inside issue 04/2017. And if you don’t have it in your collection it’s available as a pdf download from the Burda website

I was a bit worried about the non-stretch factor of a satin brocade but the cut of the pattern was excellent. Allowing enough room to negate the need for expansion!

She didn’t want to include the zippered pockets. She felt that it would upset the shape of the leg, create more bulk and look ugly… Who’s the dressmaker round here?! She also rejected the drawstring at the waistline so I just incorporated an extra channel of elastic instead. talking of which, I’m a bit irritated by the ‘roll’ of the elastic. Doe’s anti-roll or non-roll elastic really make that much difference? Please let me know I’ll invest if it does. My loyalty to my Shepherds Bush haberdashery stall is strong but I feel I could possibly betray allegiance for the sake of a well-behaved elastic. Just don’t tell!

I included 3 channels of 1cm elastic at the waist. This technique worked so well for Amelia Fang’s petticoat so I didn’t see why it wouldn’t work so well for these.  The instructions called for 1.5cm width. Maybe that’s where I fell down. Or maybe that there was more fabric to gather at the waist for the petticoat and so less room for the elastic to move around. 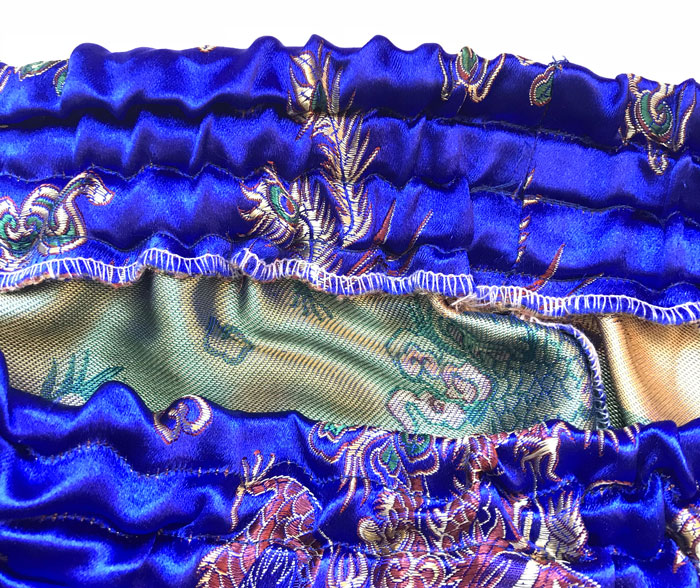 It’s not such a biggie when they are on. Seems to straighten out. I did stick to the instruction of 2cm wide elastic for the 2 channels at the ankle cuff and that seemed to stay in place a bit more. 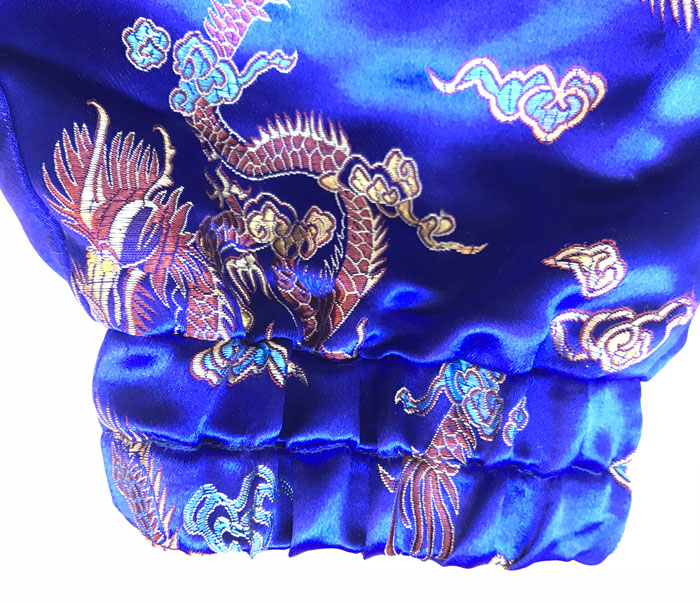 These joggers sew up real quick. Especially if you’re leaving out the pockets. And even quicker when your daughter needs them in half an hour because she is going out and has ‘literally nothing to wear’. These inimitable groans are recited literally every week accompanied by a stomp up the stairs. I’d like to say they took half an hour though the threading of the elastic probably took that long! But it really wasn’t much longer than an hour or so. 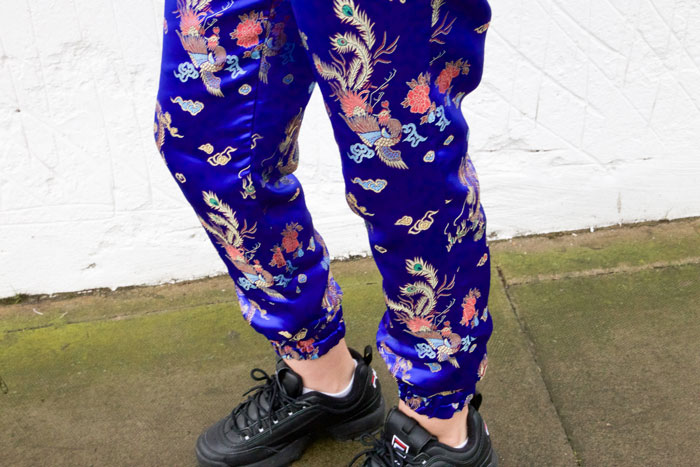 She’s had so many lovely comments about them and already wants another pair in black with pink stripes. I’m sure she could find those in the shops but to be fair, I really like that she wants me to make them. I like that she dictates how she wants them and recognises faults and fitting issues in RTW styles. It might sound a bit princess-like. But it’s also a learning curve. She can see what time is invested and she can see what works and what doesn’t. She’s currently in the process of making herself a slip dress that she is sewing all by herself along with a group of friends, all making the same. I’d like to think that I’ve got something to do with that but I don’t like to pressurise her. I prefer just to plant the seed!

So the trade-off for a second pair was that I got to take some photos of her wearing them for my blog post. Ordinarily not too much to ask but you’d think I was asking the impossible – sabotaging her schedule and ruining her whole life! I managed a five minute shoot. With no head. And a lot of huffs. Oh those hormones. Oh the joys!