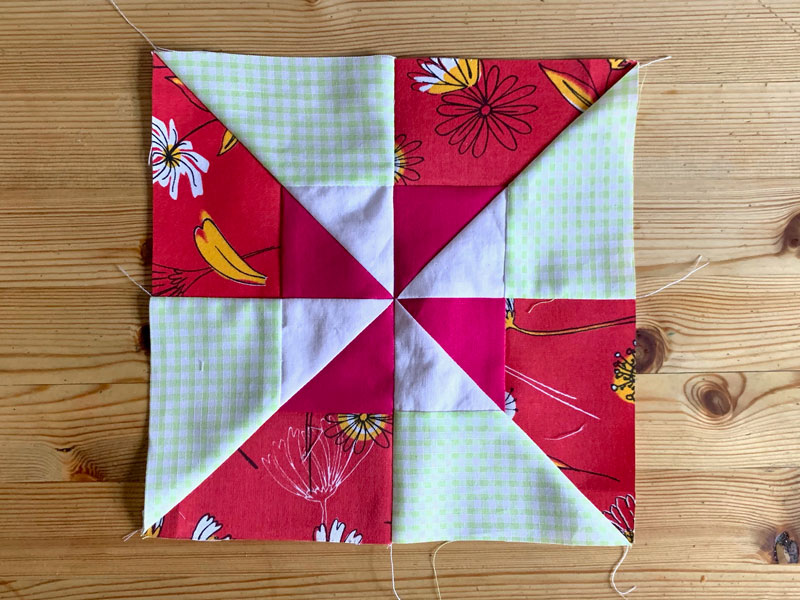 This is my latest quilt block from The Art of Quiliting magazine, issue33. This is the Double Pinwheel or Beginner’s Joy. There appears to be a few different designs of the same name when I did an online search but the fundamental  elements of a small pinwheel within a larger pinwheel remains constant.

Switching the dark and light toned fabrics allegedly makes the sails revolve in opposing directions although I can’t really see it in this one!

The order of events were to stitch together the green gingham patches with the small white triangles and then stitch the red floral pieces to the small crimson triangles. These triangles were then joined along their diagonal edges to make the four quarters of the block. The four quarters are laid in their final positions so that the pinwheel appears to be rotating clockwise and then pinned together and sewn in two pairs along the centre seams. Finally the two halves are sewn together with the final seam pressed open.

I fully intended to show this one as step by step process but completely forgot. Will try to do that with the next block – block 27 which is  a simple but cute nine-patch and a little rest from all those points!

Name: Double Pinwheel or Beginner’s Joy
History: Beginners Joy was first recorded in the early 20th century and apparently reflects the maker’s delight in joining the 16 pieces together accurately… I get that!
No. of pieces: 16